A sense of place

Good writing transports you in time or space. Sometimes it does so through a sense of place – something that is hard to define; you know it when you read it. Two books that transport you


Two books this time, one American, one English. The two books have very little in common, except that I enjoyed them – and the fact that both have a strong sense of space.

Writers can work in inner or outer space. Some are into the workings of the mind or the soul, and they burrow into the heads of their characters and stay there, unconcerned with the landscape through which they move or the built world around them.  This is true of some major books. I can, for example, remember little of the environment of The Brothers Karamazov, though it is there. Thomas Mann’s The Magic Mountain is, again, certainly set somewhere (actually in Davos), and its location in the mountains is symbolically important. However, the book concerns itself with character and culture, and has little sense of place.

To be sure, a sense of place is not solely physical; indeed there has been debate as to exactly what it is. It can be psychic rather than physical and both Mann and Dostoyevsky are clearly concerned with the first, even if not with the second. Yet a sense of the physical environment can greatly enhance a story, and does just that in The Snow Deer and Other Stories, the first of the two books I’m reviewing here. When the psychic and physical environments are melded into a whole – as they are in the second of the two books, anemogram. – the result can be both inspiring and disturbing.

K.A. Krisko
The Snow Deer and Other Stories 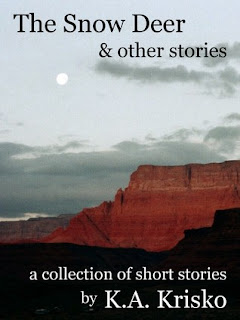 This collection of short stories was a pleasure. All of these six stories are atmospheric and well-written. Most have something to say about the human condition, but K.A. Krisko has a light touch and they’re very readable.

The first story, Joey’s Hands, is typical in this sense; a child realizes that she can’t always be responsible for her younger brother, who is blind. In another, Firefly, teenage friends drift apart as one of them forms an adult relationship, and a tragedy unfolds. In One Wet Dog, a park ranger rescues a dog in distress and then understands that she and the dog have, in a sense, rescued each other. There are humane and perceptive themes to these stories, and most of them leave you thinking, “Ah yes. Yes, I see.”

It’s a short book; I got through it in an hour or two, and I did feel I’d have liked more. Also, one or two of the stories left me hanging a bit. Yet I was impressed, for several reasons. One is Krisko’s subtle understanding of her characters; they’re very real. Another is that these stories are all written in a straightforward and highly literate style, with an old-fashioned clarity and good grammar.

But what is really striking about these stories is their sense of place. Joey’s Hands, for example, is set in a remote boron-minding community in the Mojave Desert. There is not much there, but the surroundings are beautifully described, in an almost tactile as well as visual way. Firefly takes place in a decaying naval base on a barrier island off the Atlantic coast; the two teenagers can see the bright lights of the mainland boardwalk nearby, and they contrast vividly with the darkness of the island, which they cannot leave. The Possessed RV is set in the arid rocky beauty of the Joshua Tree National Park.

Krisko has a striking ability to take you to these places and immerse you in them. It comes as no surprise to find that she has worked for the US Forest Service (USFS) and the National Park Service. In fact these stories have the sense of light, space and air that infuses some of the very best American writing. I found myself thinking of another veteran of the US Forest Service, Norman Maclean. Years ago an American girlfriend lent me a copy of A River Runs Through It and Other Stories. “You might find it a bit American for your tastes,” she said (I’m English). In fact that was what “made” the book for me. Krisko especially reminded me of Maclean’s story USFS 1919: Ranger, the Cook, and a Hole in the Sky. A country’s literature can be the legacy of its landscapes sometimes, and the US has a startling variety of those.

I would have liked this book to be longer. I would also have liked all the stories to come up to the standards of Joey’s Hands and Firefly. Even so, I found the best of this book pretty memorable, and I hope Krisko gives us more. 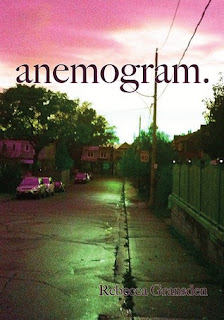 From the landscapes of the US to England now, and something very different – but with an even more powerful sense of place.  I wanted to read anemogram. (sic) because people I knew had praised it highly. It took me three attempts. The opening paragraph is willfully obscure. The title was, the author says, chosen at random. (For what it’s worth, an anemogram is graphic record of wind speed.) The first few pages sometimes seem overwritten. Those who read this review, and then read this book, will think at first that they’re wasting their time. They’re really not.

Rebecca Gransden’s anemogram. opens in an abandoned yard in the woods. It’s late summer, and a girl of six or seven has been sleeping rough. We follow her as she wakes and moves through the forest, and finds a hut, a sort of site office. She breaks in, and is eventually caught by a young man. She tells him her name is Rachel, and that she is alone because of an accident, and he takes her in search of her parents, who he thinks must be injured. She slips away from him and spends the night in the woods.

But it isn’t long before she looks for food in another site office, where she is taken in hand by a slightly older man, David. She tells him her name is Sarah. We learn that his estranged wife has gone abroad with their children. He is alone and decides to keep the girl with him and pretend that the girl is his niece. But he knows that he may be suspected of molesting the child. For the next few days they travel together as David looks for somewhere they can be together without exciting this suspicion. It is a search that leads to tragedy.

Who, really, is the girl, and where has she come from? Gransden’s in no hurry to answer this, and you eventually realize that she might not even do so. To find out if she does, one must read the book. But in any case, by the time I was halfway through, I’d decided it didn’t matter. What did, was David and Sarah’s strange journey through the physical and psychic landscape of modern England.

It’s this journey that raises this book so far above the ordinary. Gransden is a visual, almost tactile, writer, and has a wonderful ability to conjure up a time and place. Thus Sarah spends a night in the woods early in the book; the twigs, leaves, damp earth and gnarled bark are so real that you can smell the forest. She and David visit a hilltop on the coast, and the light on the sea is as real as the flakes of pastry from their picnic that are blown about in the wind. When it comes to the human environment, Gransden is even better; the tatty inside of a site office, motorway service stations, a run-down farm building, an antiseptic and regimented care home where they visit David’s mother. The people, too, feel real; a casual encounter with a fast-food worker or a youth in the park or a man in a hard hat – they’re all right there in your head.

Whether Sarah herself is real, or a ghost or a runaway or what, is secondary; in fact, I’m not sure Gransden greatly cares. It just isn’t the point. What the point of this book really is, only Gransden knows. But I think I can guess. The building sites and supermarkets and fast-food restaurants in this book all convey an atmosphere of sterility and alienation through which David moves as if in a dream. For him, Sarah represents connection and meaning, and a chance to revisit the excitement of childhood. In the end it will be neither.

How this book does end shouldn’t be revealed here; suffice to say that it is mysterious and affecting, and that readers will make of it what they will. But the point, for me, is that David represents the lot of us. anemogram. seems, at first, infuriating, but in the end it is an extraordinary and evocative meditation on what it is to be English in the 21st century. We yearn to be in the woods with Sarah, but our world is the supermarket checkout, cardboard fries, motorways, and the smell of petrol in the rain.

Mike Robbins's novella Dog! is available as an ebook for just 99c (US) or 99p (UK), or as a paperback, from  Amazon (US, UK, and all other country sites), Barnes & Noble, Kobo, Indigo, iTunes and more. Find all his books on Amazon here.