The Great War in modern voice


The First World War produced a blizzard of books. Many are still read. Yet one of the best has been largely forgotten. Written with a modern voice nearly 60 years after the war ended, Eric Hiscock’s The Bells of Hell has a life and freshness that you won’t find in the classic memoirs

The British literature of the First World War has an identity of its own as a body of work – something that from the second war lacks. It’s no mystery why. Most of those who fought for Britain did so on the Western Front; this gives the war literature a certain cohesion, as does the fact that many of the authors were from highly literate and privileged backgrounds, or were men of letters, or both.

Edmund Blunden, Robert Graves, Frederic Manning, Richard Aldington and Ford Madox Ford all fit into these categories. Posh non-literary figures also got in on the act (Anthony Eden, for example, whose Another World is rather good). It’s a peer group well depicted in historian Josh Levithan’s  splendid A Century Back blog, which is currently tracking the war day by day through their letters; it shows us how incestuous this world of pen and sword actually was. Yet not all of this cohesive body of work speaks to us directly now; sometimes the language can seem archaic and mannered. J.B. Priestley’s fragment Carry on! Carry On!, in his autobiographical Margin Released, is an exception (it was written much later). But much Great War writing, superb though it is, seems increasingly of its time.

Eric Hiscock’s The Bells of Hell Go Ting-A-Ling-Ling, by contrast, has sunk without trace. But because it was written nearly 60 years after the events it describes, its language has a freshness that is much easier for the modern reader than (say) Blunden, who is a wonderful writer but can feel very old-fashioned. To read Hiscock, by contrast, is like hearing about the war from a gifted raconteur in the pub. The gap in years means he can also look at the war with modern eyes, and be quite brutally frank. 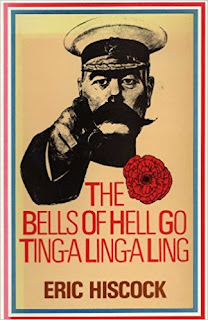 Hiscock was born in 1900 and brought up in Oxford. His parents had met when both in service to an aristocrat, Lord Lane-Fox, and his father had later become a “scout” – domestic staff – in one of the Oxford colleges. Hiscock’s home was not a wealthy one, but seems to have been secure and cheerful. As the book begins, however, Hiscock joins the army – at the age of just 15. The army clearly knows he is underage, and he spends the next two years in Britain. (In this he is luckier than an old teacher of mine who had been sent to the Somme at 15, and who started crying when I asked him about it over 50 years later.)

The young Hiscock is shipped off to Edinburgh, where he makes the acquaintance of one Sergeant-Major Priestman. The latter is a regular who “had had a testicle shot off in the Mons retreat”, and who “bullied from Reveille at six in the morning ...to Lights Out at night, spitting venom. But at week’s-end, he was not averse to accepting hard cash for a forty-eight hour pass.” It reminds one of the famous wartime song (which Hiscock quotes):

When the bloody war is over,
O how happy I shall be...
No more crying out for furlough,
No more bribing for a pass,
You can tell the Sergeant-Major
To stick his passes up his arse.

In other words, never mind the mud and the lice of Flanders; you were bullied on a massive scale long before you got there. That’s something you won’t find so much in Edmund Blunden or Robert Graves (though Frederick Manning, who spent time in the ranks, hints at it more).

Hiscock does get to the front, in early 1918 when he is still some months underage. As he and his companions file into the trench for the first time, a sniper kills the sergeant (not Priestman) a few feet from him. “Possibly somebody did something about him as his lifeless body fell to the sodden duckboards ...but I think we just left him there. As [we] scrambled into the shelter my steel helmet caught a protuberance in the muddied roof. It was the knee of a khaki-clad corpse.” There is plenty more like this. One of the most evocative passages in the book, for me, is Hiscock’s description of repeated night journeys up to the trenches, on duckboards across the mud; it is a treacherous passage and it is not unusual for an overladen man to simply lose his footing and fall into the mud or a flooded crater below, never to be seen again.

Yet some at least of this can be found in many books (though perhaps not quite so vividly). What marks this book out, besides its contemporary feel, is its frankness. Hiscock doesn’t bother with the King and Country nonsense. Instead we hear how months of bully-beef wrecks his digestion so that he will be seriously ill in later years. We hear how he gets his penis bitten by a vengeful French girl after he decides, as the last minute, not to have intercourse with her (she was, “it turned out, a diseased nymphomaniac”). It’s played for laughs but then he quietly tells us, at the end of that passage, how a fellow-soldier later catches a dose at the end of the war and shoots himself rather than go home to his family.

But perhaps the most extraordinary part of this book is Hiscock’s own court-martial for cowardice.  As he recounts it, he injures himself accidentally while cleaning his rifle, and has been accused of doing it deliberately to get himself repatriated. The accuser, a Lieutenant Clarke, is (according to Hiscock) a homosexual jealous of Hiscock’s friendship with another man. It is impossible to know if this account is correct; one could, I suppose, find the transcripts of the court-martial if they exist, but they might not settle the case. For what it is worth, Hiscock is acquitted and returns to combat – incredibly, he is returned to the same unit, which must be dangerous for Clarke – and serves until his discharge in 1919. This does not suggest cowardice. Yet a quite startling number of men were convicted; most were not actually shot, but over 300 were, and Hiscock would have been well aware he was on trial for his life. If one does take Hiscock’s account at face value, it demonstrates that this war put ordinary men at the mercy not just of the enemy, but of the very worst of their own people.

Hiscock survives the war and goes on to take part in the postwar occupation of Germany – itself fascinating, as there are few enough accounts of the post-WWII occupation, let alone of this one. The book ends back in Oxford as he picks up the thread of his life. In these last parts he describes friendships with two intellectual homosexuals in some detail. In the book he also talks about feelings of love for other soldiers. Hiscock does not appear to be especially prejudiced against homosexuality, and his attitudes seem fairly liberal for 1976, let alone 1918. I have heard it suggested that Hiscock himself had repressed feelings for men, not uncommon at that time. But I do not see why his sensitivity towards others’ sexuality should be ascribed to that. It may be that, having spent much time at close quarters with other men in his youth, he was forced acknowledge the existence of diverse sexuality; after all, he was also (if the Clarke story is true) nearly killed by its consequences.

There is much that in The Bells of Hell that is grim but in the end, oddly, the book itself isn’t. Hiscock writes warmly of his parents, of his life in Oxford and of (for example) fishing for Sunday breakfast with his father at Godstow. He seems to have been aware of his luck in surviving the war. The book is also peppered with character sketches, often wry and funny (I loved the forger and general spiv, Vanner). And the various fumbling sexual adventures show a keen sense of the ridiculous.

I first read this book in 1991 and never forgot it, to the extent that I decided to track it down 25 years later. I found it as startling and vivid as I did before, and wondered why it has not had the impact of other books about the first war. Hiscock went on to a successful career in advertising and Fleet Street, and married Romilly Cavan, a novelist and playwright who also wrote some early TV scripts. The Bells of Hell was published by Desmond Elliott’s Arlington Books, a small company but a distinguished one. It did also get a brief release as a paperback. But its impact seems to have been small. Hiscock was not of the officer class that still dominated publishing and criticism in the 1970s, and it may be you still had to be an Oxbridge poet, or at least of the slaughtering classes, before you were really allowed to write about the Great War.

If so, that is our loss, because there are things that those classes would not have questioned, or seen in quite the same way. Wars are not just about what a country does to its enemies; they are about what it does to its own people in the process, and the way in which men like Clarke, or people of a certain class, can suddenly wield huge authority over those of another. That is something we could perhaps remember in our own times, when some would have us believe that it’s only foreigners who are our enemies.