Evans and Menon’s Brexit and British Politics is not the first book about Brexit, but it’s a shrewd and convincing analysis. This referendum wasn’t just about Europe

Anyone who, in the wake of the Brexit vote, still thinks that it is politics as usual should read Evans and Menon’s Brexit and British Politics. This slim volume explains clearly why the June 2016 referendum wasn’t wholly about the EU. It also demonstrates that the mendacity or otherwise of the campaign may be moot, because the result was probably preordained. It’s a convincing thesis in many ways, but there are one or two odd omissions. 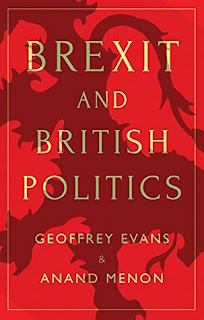 Geoffrey Evans is Professor of the Sociology of Politics at Nuffield College, Oxford. He has published widely on inequality and politics. Anand Menon is Professor of European Politics and Foreign Affairs at King’s College, London. He has written a great deal on the European Union, including but not limited to Britain’s role in it. Together they are, I suppose, paid-up members of the great and the good, and the sort of experts that Michael Gove thinks we have all had enough of. That hasn’t stopped them from writing a challenging analysis on the roots of the Brexit vote.

The authors point out that in the 1990s and 2000s, Europe wasn’t really the pressing issue for the public that it was for Tory MPs. “The percentage of Britons citing Europe among ‘the major issues facing Britain today’ rose to double figures in the 1990s ...but the EU never became a decisive political issue,” they say, pointing out that by 2001 it had sunk back so that just 14% named it as an issue that might determine their vote.

What was happening at the same time, however, was an evolution in politics that concentrated all debate in the centre. Evans and Menon see this as a phenomenon of the Blair era and they are surely right to ascribe a large part of it to the New Labour project; as Labour chased Basildon Man, a broader polity disappeared. One might call this centrification (my phrase, not theirs). They refer to it as an elite consensus. Within it, acceptance of globalization was not open to question. Importantly, neither was a certain liberal set of values on matters such as gay marriage and capital punishment. One of the nice insights of this book is that it sees this “values factor” as equally important in fostering a sense among those not part of this consensus that they were excluded from influence, and that politics did not serve them. The authors also note a growing homogenization in MPs’ backgrounds; professional politicians replaced the trade-union representatives of the past, for example. So when the 2016 referendum offered people a rare chance to register a protest against the elite consensus, they took it.

Evans and Menon may ascribe a little too much of this “centrification” to Blair’s era; there was concern in the early 1960s about so-called Butskellism, the easy consensus around certain centrist preoccupations or views. (Rab Butler was a prominent Tory politician of the late 1950s; Gaitskell the moderate Labour leader of the same era. Both were robbed of the premiership – Butler by Harold Macmillan, and Gaitskell by death.) Even in the 1970s, a lively time in politics, there was a perception that ideology no longer mattered. I can remember William Davis, editor of Punch, writing in 1973 that it was now, “Forget the politics: Are we better managers than the other lot?” So this ossification around an elite consensus in the 1990s was not really new. But it is true that interest in politics fell away rapidly in the time of New Labour, as Evans and Menon themselves demonstrate. “In the 1970s and 1980s, close to 80% would go to the polls,” they say. “Since the turn of the century, ...the average has been around 63%.” But for the Referendum it was 72.2%.

From all this, one could conclude that people voted leave purely because they had a chance, for once, to give the establishment a good kicking, and were not that interested in the EU at all. In fact, Evans and Menon don’t go quite that far. They make it clear that many voters did have reservations about the EU and that most British people had never really identified with Europe (apparently they scored 28th out of 28 for “feeling European”). The Single European Act of 1987, creating the single market, probably took integration as far as most British people really wanted to go. Neither do they ignore the role of immigration in the debate. The authors are also careful about the common analysis that Leave voters were the poor and those left behind by globalization and European integration. There is truth in this, they say, but it is not the whole truth; there were actually more middle-class Leave voters than there were working-class (to be sure, this does turn a bit on definitions). Brexit was not entirely a revolt by the dispossessed. Neither do Evans and Menon ascribe the breakdown of confidence in politics solely to “centrification”; they also cite (for example) the ghastly expenses scandal of 2009, when MPs were caught fiddling their expenses on a massive scale.

Even so, the authors make a compelling case that Brexit was not simply a vote on Europe. It was to a large extent a rebellion against a centrist consensus – and against a perceived elite with which that consensus was identified. The referendum campaign itself, as they demonstrate, made very little difference at all.

However, there is an elephant in the room that Evans and Menon ignore, although it has been trumpeting loudly and crapping on the floor for many decades. This is the British electoral system, which they mention only two or three times, and very briefly. They are clearly aware of it as a factor, but do not seem to attach much weight to it. But it is the biggest single factor in the exclusion of most people from the political process.

This is partly just because it delivers results that do not reflect popular voting intentions, and also excludes huge areas of the political spectrum from power. This is evident from the 2015 general election results. The Tories were able to secure an absolute majority in the Commons although they received the support of only 37% of the voters , and only 24% of those registered to vote. Again, the culprit is the “winner-takes-all” electoral system. According to the UK’s Electoral Reform Society: “Labour saw their vote share increase while their number of seats collapsed. The Conservatives won an overall majority on a minority of the vote, and the Liberal Democrats lost nearly all their seats – despite winning 8% of the vote. The SNP won 50% of the Scottish vote share, but 95% of Scottish seats.” UKIP won more than one in eight of the votes cast but just one seat. It could be added that many will have abstained because they knew their votes wouldn’t count where they lived. No wonder people feel that politics does not serve them.

However, simple inequities in the result aren’t the whole story; even worse, the system makes a relatively small number of voters pivotal and sends the political discourse in their directon, excluding everyone else. If you’re not a floating voter in a marginal, no-one cares for your opinions. This is what happened in the 1990s when the two main parties chased Basildon Man. They forgot about everyone else. On June 23 2016 the political establishment paid the price for refusing to change an iniquitous electoral system that kept them in power.

There is a further point that Evans and Menon don’t discuss, although they will be aware of it. This is the perceived denigration of national identity by a pro-European elite – an especially sore point amongst the English. This is related to the “values” issue that the authors do cover so well. However, it is distinct from that and especially toxic, as the referendum and its aftermath have been accompanied by some nasty displays of noisy nationalism. The way some in politics have played on this has been very worrying – for example, the silly business about getting blue passports back (the old ones were black not blue, and in any case the colour change wasn’t insisted upon by the EU). And yet one understands how some English people feel. The morning after the referendum, a picture was widely posted by Remain voters; it showed delicious European foods on one side and a solitary can of beans on the other. The picture was well-shot, and in a way witty, but one wonders if it was wise. No-one likes to see their culture insulted. Remain voters may be right, but they often struggle to understand the other side.

Notwithstanding these caveats, Evans and Menon’s analysis is shrewd and interesting. If they miss one or two insights, they have plenty more to offer – and in any case, it is early days; one suspects they will have more to say when the time is right. In the meantime, Brexit and British Politics is thought-provoking, and a good read.

Evans and Menon finish by warning that the Brexit vote has left British politics in disarray, with a rudderless political establishment trying to work out where it now stands, and a deep divide between the governors and the governed. In a telling quote, they describe how one of them warned in a pre-vote debate that Brexit would cause a reduction in GDP – only to be told by an audience member, “That’s your bloody GDP, not mine.” Late in the book, the authors quote journalist Chris Deerin, writing in The Herald Scotland in summer 2017: “The collapse of trust in our politicians, our politics, our institutions and our post-war settlement is real and it is profound. It pervades every layer of British society ...The titled, the humble and the dogs in the street alike know that our democracy has gone wonky.”

So what do we do now?