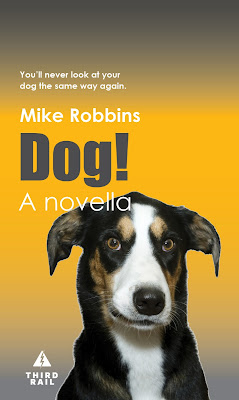 Bazza is a cheerful, beer-swilling college lecturer with a penchant for weed and redheads. One day he adopts a dour old rescue dog. They're happy enough together, in their own way. Then a Himalayan Buddhist monk comes to visit – and senses the dog has walked the earth before. Who was he? Why has he come back? A story unfolds of war and betrayal, love, loss and murder.

Bazza and his dog will make you laugh. But they might also make you cry. And you'll wonder who and what we are, and why; and where we are all going. Here's how Dog! came to be written.

In the summer of 1975 a Welsh hypnotist, Arnall Bloxham, startled everyone in Britain in a TV programme in which he regressed three subjects to their past lives. One had served on a ship of the line in the Napoleonic Wars; another remembered being a hunter-gatherer in the prehistoric  Balkans; and another recounted fleeing from a pogrom in medieval York. The programme, The Bloxham Tapes, generated some debate in later years as to what it did and did not prove. But no-one under 50 would remember watching it, and it may not now exist. (An Australian university has a VHS tape, apparently; but those tapes do not always survive so well.)

However, I never quite forgot the programme. What happened after death? If you were reborn, would it be as a human again, and if not, why not? Forty years later, stuck on a book that was going too slowly, I broke off to write the novella Dog!, the story of an elderly rescue dog who is not quite what he seems.

Dog! isn’t religious (and neither, really, am I). It was the dramatic possibilities that I wanted to explore. What if that pug you saw in the park was actually Henry VIII? I also wanted to have a bit of fun with the subject. The dog’s owner is a cheerful slob called Bazza (the English often abbreviate names into Baz, Caz, etc.), a university lecturer in a provincial English city. When not teaching logical positivism or medieval ontology, Bazza chills with a spliff and a beer or browses porn sites. He’s also adopted an old dog, but finds it dour and unaffectionate. Still, the two of them live together happily enough, despite the dog’s contempt for humans and its habit of licking itself in front of guests. Then a Himalayan monk comes to stay for a few weeks while teaching courses in the city. He senses at once that there is something strange about the dog. He is right.


But perhaps that’s all I should give away. Except that, as the book’s blurb says: “Dog! is a powerful story of love and loss, sin, redemption and dog mess. You’ll never see your pet the same way again.”

"There are some books that one admires, others are respected, a very few are treasured. Dog! is a book to be loved." — San Diego Book Review


Dog! is available as an ebook for just $2.99 or as a paperback, from  Amazon (US, UK, and all other country sites), Barnes & Noble, Kobo, Indigo, iTunes and more.

From reader reviews of Dog!

“This novella was utterly captivating, funny, touching and thought- provoking. The voice of the dog was hilarious and if I had to imagine what a dog would sound like if it could speak, then this author nails it. ...My next step is to read more of this author’s work, because this captivating novella made my ears stand up and my nose twitch with anticipation.”

“A good story does two things, it entertains and teaches. This one hits it on both marks. Very enjoyable.”

“This is a terrific story with a charming premise.”

“This short novel by Mike Robbins is a wonderful little meditation on relationships: with each other and with our animals.”

“If you've ever wondered what your four-legged, furry friend, was thinking as he/she looked up at you with that complex, yet perplexing stare, this book is for you.”

“The premise is simple and yet brilliantly executed. The pace unfolds gently, the writing is expertly crafted and easy on the eye, the humour is wry and also laugh-out-loud funny ...In Dog!, you will find Himalayan monks, Special Brew, sexual fantasies of Jack Russells..." What more do you want? Dog! comes highly recommended.”

“I actually thought the ending of Dog! was particularly fantastic and I found myself thinking about it for a good while.”

“This is truly innovative literature. A remarkable achievement. It's not often you come across a work like this. A melange of philosophical musings, hair raising events, and reflections on the nature of the universe. But all this rattles along like an Iris Murdoch, revealing new discoveries every new chapter, and it all finishes up with a redeeming end.”


“Dog! Is a tale of redemption, of a soul in torment, but with some hilarious, laugh out loud moments as well as some profound sadness. For an unexpected, entertaining and surprisingly deep read, I thoroughly recommend this novella. I particularly liked the way that Dog started to lick his bits in the middle of the room every time he got bored with the conversation of the humans.”

“...The pace of the narrative does not let up in this short book, building very effectively to a final revelation, and an ending that produced a rush of emotion. This is a lovely piece of writing.”