There is more than one threat to democracy in Britain, but the worst is an electoral system that seems set up to sabotage it

As I write this, the survival of democracy is, in most places, not a given. In Britain, a misled and angry electorate has made a decision on the EU that will certainly damage them, and others. In the US, democracy may soon elect a man who appears to care little for it. Across Europe, the far right has been empowered by racist rhetoric.

There has been an assumption that democracy is the ultimate form of human organization. Nowhere was this assumption better embodied than in Francis Fukuyama’s 1992 book, The End of History and the Last Man (1992). But it was not a new view; the presumption in favour of democracy as the final form of government had been embedded in Western thought since 1945. The idea that democracy could not be wrong underpinned the Vietnam War and the invasion of Iraq. There has been an innate view that the world progresses towards democracy. But there is no such thing as automatic progress. In fact, as the English philosopher John Gray has pointed out (notably in his 2007 book Black Mass), the idea that history cannot go backwards is arrant nonsense.

And there are plenty of challenges to democracy. They include rising inequality, the refugee crisis and the rise of the radical Right, social alienation and division, and the instability of the world financial system. However, democracy in Britain, and to a lesser extent the US, faces a particular danger – electoral systems that can disenfranchise their voters, distort the political agenda and permit the election of governments that do not have popular support.  Given recent events in Britain, and the nature of the US general election due in November 2016, this is a very acute question.

One man, one vote? Forget it
First, the United States. For Presidential elections, each state sends elected representatives to an electoral college, the number of these electors being proportionate to the population of the state. However, the representatives are elected on a winner-takes-all system, so a Republican voter in a mostly Democrat state has little effect on the result. Some votes thus have far more weight than others, and it is quite easy for a President to be elected with a minority of the votes cast.

There have been a number of such cases since a popular vote became the rule in all states (in 1872). Harry S. Truman’s surprise win in 1948 was achieved with 57.1% of the vote in the electoral college, but he had received just 49.5% of the popular vote.  The most egregious case was Woodrow Wilson in 1912 (81.9% in the electoral college and just 41.8% on the ground). However, that was a long time ago, and was – unusually for the US – a four-way fight. More recently Bill Clinton scraped in twice on a minority vote, with just 43% of the popular vote the first time round. It should be noted that he did beat George H.W. Bush, who got 37.4%; the balance was taken by independent Ross Perot. However, when George W. Bush won the deeply controversial 2000 poll, rival Al Gore actually did beat him in the popular vote, by 48.4% to 47.9%. (President Obama did win the popular vote, in both 2008 and 2012.)

More seriously, these figures are of votes cast and do not reflect abstentions. Both candidates for the November 2016 US election are detested by some of those who would normally vote for their side. At the time of writing (July 2016), it is hard to know how this will affect the result, but it may be that many people will simply not vote.  This could result in a President who has won not only a minority of the votes cast, but those of an even smaller minority of the electorate.  Turnout of voting-age population in presidential elections has not reached 60% since 1968 (and has only once exceeded 55% since, in 2008). In the disputed 2000 election, it was only just over 50%. So how great a mandate does a President have when they walk into the White House, and what does it entitle them to do?

In the United States, of course, the Constitution has checks and balances, and a President has some things they cannot do; they must get their measures through a potentially hostile, and separately elected Congress. Having done so, they may then see such a law struck down if it is not in accord with the Constitution. The United Kingdom has no such safeguards. A government elected on a minority vote will have more or less untramelled power, as it requires only a majority in Parliament, nothing more; the Lords can review and delay but not prevent legislation, and the head of state, by convention, does neither. In view of this it would appear essential that the composition of Parliament reflect popular voting intentions.

But it nowhere near does. The current government received the support of 37% of the voters at the last election, and only 24% of those registered to vote. Again, the culprit is the “winner-takes-all” electoral system.  According to the UK’s Electoral Reform Society (The 2015 General Election: A Voting System in Crisis), this was “the most disproportionate result in British election history. Labour saw their vote share increase while their number of seats collapsed. The Conservatives won an overall majority on a minority of the vote, and the Liberal Democrats lost nearly all their seats – despite winning 8% of the vote. The SNP won 50% of the Scottish vote share, but 95% of Scottish seats.” The anti-EU party, UKIP, won more than one in eight of the votes cast but just one seat.

These inequities have several consequences. The first is simply that the government of the day lacks legitimacy, which makes the UK marginal for being a democracy. The second is alienation; if your vote is not going to affect the issue in the constituency where you live, why would you vote? But also, why would you feel any loyalty to the State?

Don’t like anchovies? Tough
Inequitable voting systems hold a further threat to democracy that is more subtle, and dangerous.  A political party or a Presidential candidate now sets policy for the voters that can affect the result – that is, floating voters who live in swing states or marginal constituencies. Modern campaign managers have databases such as the Republicans’ Voter Vault (now called GOPData) and the Democrats’ Demzilla that can narrow this group down with extraordinary accuracy. As Peter Wallsten and Tom Hamburger explained in the LA Times some years ago: “The program allows ground-level party activists to track voters by personal hobbies, professional interests, geography — even by their favorite brands of toothpaste and soda and which gym they belong to. Both parties can identify voters by precinct, address, party affiliation and, often, their views on hot-button issues. ...Voter Vault includes far more information culled from marketing sources — including retailers, magazine subscription services, even auto dealers” (The GOP Knows You Don’t Like Anchovies, June 25 2006). Meanwhile in the UK the Conservative Party in the 2015 Election mounted a mobile “battle bus” campaign carefully targeted on marginal constituencies. How this was paid for, and by whom, is currently (July 2016) of interest to the Electoral Commission. But it worked. And in general, as Green MP Caroline Lucas points out in her recent book Honourable Friends?, campaigners target only floating voters, and have little interest in those that don’t vote, or vote the other way.

This is not just about the relative weight of votes; it distorts the issues on which an election is fought. A newspaper may have stirred up concern about (say) Syrian refugees coming to the UK, even though very few are, because it has determined this is of interest to its middle-class readers, who happen also to be the swing voters in semi-rural seats such as Upper Snodgrass or The Merkin. Your own concerns may be completely different – a dodgy hospital trust, a lack of policing; but because you are not of the CW1 demographic, are not in a marginal or do not like anchovies, you do not matter, although your concerns may be far more widespread than those of the voters who do. The election will be fought on the anchovies issue because the Daily Mail has convinced its own relatively narrow readership that it is what matters.

Moreover the voter’s choice is further limited because the electoral system in the UK and US forces parties to be much broader coalitions than they should be. A Republican voter may therefore find themselves faced with only one choice – Trump, for example. In this case, s/he will at least have had a chance to vote in the primaries. A British voter will not have had any role in choosing who their constituency candidate is, unless they are an active member of a political party. It has been this, in part, that has led to the implosion of the two main British parties following the vote to leave the EU in June 2016. There is no consensus within either party as to how to proceed, or under whose leadership. This is because both parties really need to split in two, and offer the voters a choice. Neither can afford to let that happen. A party that splits will, under a non-proportional system, simply disappear.

A choice. Demagogues? Or good government?
However, there is a yet further danger to democracy because of the electoral system, and that is that a demagogue or mountebank with only minority support can come to power. In the US there would be some constitutional checks, though they might be subverted (Nixon, however, failed in the end to subvert them). In Britain a demagogue elected by a minority would face little opposition once in power.

It should not be argued that proportional voting would make the subversion of democracy impossible. That is clearly nonsense. Hitler came to power under a proportional system (albeit a party list system, which would not be my first choice). However, it should be noted that Hitler’s total – he won 33.09% of the votes cast in November 1932, on a turnout of about 80% - represented about 26.5% of the registered electorate. This was more than the Conservatives won in Britain in 2015, and would have carried him unchallenged into absolute power under the British system. In Germany, it at least required the (reluctant) consent of the President.

Any form of human organization must be underpinned by mechanisms that prevent its subversion, and the electoral system is of course only one of them. E.M. Forster, whose belief in democracy was qualified, commented that “no device has been found by which... private decencies can be transmitted to public affairs. As soon as people have power they go crooked...” (What I Believe, 1938). That is a cynical view, but it is true that nowadays the “devices ” are in poor condition. They include a venal media, antiquated Parliamentary procedure, the degradation of MPs to lobby fodder, the lack of an effective review chamber and an inactive Head of State. However, most of these would be of less consequence if it were not for the electoral system.

It is this that is the central threat to democracy in Britain, depriving governments of legitimacy and alienating millions from democracy. With electoral reform, many of the ills of British governance would right themselves, forcing the media to adopt a broader agenda and almost certainly leading to reform of Parliament. Without electoral reform, however, it is hard to see why people will want to defend what little democracy they have. 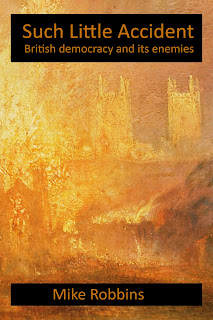