Three Seasons is a book of three novellas, unconnected with each other, but all set in the south of England in the 1980s. It is about the Margaret Thatcher era in Britain, but it is not about politics. These three stories are portraits of a country and its people on the verge of change. 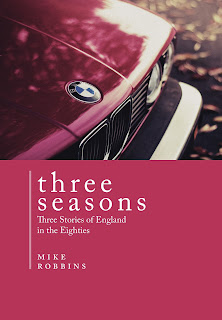 The 1980s were divisive in Britain and remain so in retrospect. The culture wars they left simmering below the surface broke out again when Margaret Thatcher died in 2013; debate on her legacy was spiteful on both sides. I gave my own view on this blog at the time (Thatcher: An Unintended Transformation, April 10 2013); I believe that she profoundly failed in what she set out to achieve. But politicians and the things they do are only part of what defines us. They are not even the most interesting part. Who, really, were we in the 1980s?

I went abroad in 1987, but over the next two years I wrote three novellas, each of about 25,000 words, that were vignettes of the country I’d left. Each of the three novellas looks at different types of people, with distinct roles that changed during that unsettling decade. In Spring, a middle-aged Hull trawler skipper, his great days gone, has one last throw of the dice in a South Coast port. In Summer, an ambitious young man makes his way in the booming Thames Valley property market, unconcerned with the damage he does to others. Finally, in Autumn, the Master of an Oxford college welcomes his two sons home, but they awake difficult memories from half a century before.

Spring had its roots in the job I had been doing before I left. From 1985 to 1987 I was a reporter and general editorial hand on Fishing News, the weekly magazine for the fishing industry. I mostly edited stories, laid out pages and covered smaller stories on the phone, but now and then drove to ports in southern England to do interviews and take photographs. The work was not well paid, but it was fascinating. The great days of the East Coast deep-water fleet had ended a decade or so earlier, but during my time at the paper a former Hull trawlerman took over as editor, a post he held until only a few years ago. He was good to work for, always encouraging, and ready to share his knowledge. Over beer in the City Pride pub next door to our London office, and on press-day journeys to the Nottingham Evening Post, where we did our final production, he told me a lot about the industry and how it had been to work in it.

Spring is about a deep-sea skipper struggling to reinvent himself. But while skilled men like the fishermen in Spring struggled, a new class prospered. The Thatcher government’s assault on the old-boy networks in the City meant that working-class, or at least non-posh, Londoners could get on in the world of finance. Members of this new breed were rudely known as barrow-boys. That appellation was sheer class prejudice and was unpleasant. But it was true that there was a certain type of suit-on-the-make that seemed to do well from the 1980s onwards, not just in the City but in management consultancy, banking and, in particular, estate agency (real estate). This was the subject of Summer, and its hero Terry is, in a perverse way, one of my favourite creations.

At the start of Summer, Terry must deal with a knighted publishing grandee. This is the class that interested me in Autumn. Not aristocratic, perhaps; one might be the second son of the third son of a baronet; one’s sons attend a good middle-ranking public (private) school; professions may include stockbroker, diplomat, publisher, columnist, barrister or the Forces. In an earlier generation they might have included the Indian Civil Service. The Master in Autumn is typical of his class. Yet he sees his sons living in what appears to be a different world, and must make sense of them and who they are.

Like all fiction, Three Seasons will be a success only if it involves and moves the reader.  I hope it does. But for me there is a broader theme to these three stories. Three Seasons is about social change – the decline in skilled employment, the rise of the “barrow-boy”, the hollowing-out of institutions and their occupation by newcomers with different aims and different, or no, ideals. Much of this is associated with the 1980s. But people like Terry were not a product of Thatcher’s social engineering. His roots lie in the expansion of higher education some 20 years earlier. The neoliberal revolution of the 1980s did a lot to promote people like Terry. But Thatcher did not create him, or the fishermen, or the Master. They were formed by global change and the slow plate tectonics of the British class system.

Politics doesn’t usually create society. It reflects it. Politicians – even Margaret Thatcher – are a lot less important and interesting than they would have us believe.


From reader reviews of Three Seasons

“The nuance and body that flavor this work, the depth conveyed in even a few short sentences, could only be written by a man who has lived a multitude of lives.”


“Mr. Robbins is an elegant writer who, should you give him a few quiet hours, will entertain you at an elevated level.”

“In each story the author captures the ambience of the 80s brilliantly. The central characters were diverse, an elderly fisherman struggling to make a living around fishing quotas, a Yuppy fully embracing 'Its all about me & loadsamoney' culture and an academic from a privileged background. All expertly drawn and realistically flawed ...The combination of stories that span class distinctions give an excellent snapshot of Britain in the 1980s. The contradictions, unfairness, hypocrisy and sense of monumental change.”

“A great read, very quick but full of substance.”

“...running through the novellas are themes we have largely forgotten twenty-five years later; when speeding was policed by cops in cars rather than by ubiquitous speed cameras, when vinyl records were losing the battle against compact discs, when radiograms were being converted into drinks cabinets, and when people routinely lit up cigarettes in bars, restaurants, and buses.”

“These are beautifully told stories with a very strong sense of place- it is easy to get lost in them.”

“I was immediately drawn to the characters: good people, bad people, but all the same people with their good and bad sides like in the real world. Robbin’s writing style is very engaging; his descriptions vivid, and I was able to picture the scenes.”

Three Seasons is available as an e-book or paperback from Amazon, Barnes & Noble, Kobo, iTunes, GooglePlay and other online retailers, and can also be ordered from your local bookshop (ISBN 978-0991437450).

Requests for review copies should be sent to thirdrailbooks (at) gmail.com, or to the author.